The FSIN Treaty Governance Office (TGO) is mandated by Chiefs-in-Assembly to advocate for the protection and enforcement of Treaty rights and responsibilities, based on the FSIN’s Treaty Implementation Principles.

TGO supports Treaty area research and Gatherings in Treaty 4, 5, 6, 8 and 10, which are important for re-affirming the understanding of the spirit and intent of Treaty and developing strategies for the protection and enforcement of Treaty.

TGO participates at the Treaty Table of the Office of the Treaty Commissioner, and supports other FSIN Secretariats and Commissions when they come to the Table to discuss Treaty in their respective area of responsibility.

TGO also responds to requests from First Nations on facilitating discussions of self-government and inherent rights, coordination of intergovernmental agreements (such as justice)) and supporting nation-building in First Nations through the development of First Nation law and capacity-building for good governance.

The Treaty Table is a bilateral process which provides a forum for the discussion of Treaty rights and/or jurisdictions involving the Treaty parties who are the First Nations and the Crown in Right of Canada.  The provincial government is at the Table as an observer.

The Office of the Treaty Commissioner (OTC) facilitates meetings of the Treaty Table and its working groups. Originally established in 1989, the OTC was renewed by the FSIN and the Government of Canada and its mandate was expanded. The OTC also participates in public education and awareness of the Treaty relationship and Treaty history.

The FSIN and the Government of Canada signed a Memorandum of Agreement in October of 1996 which has been extended over the years. This agreement laid the groundwork for technical and leadership discussions about Treaty rights and/or inherent jurisdictions.

This Agreement does not restrict individual Treaty First Nations or Tribal Councils from engaging with the Crown on subjects included in this Agreement.

The Treaty Table is intended to discuss but not to renegotiate the Treaties or to change the nation-to-nation relationship that exists between the parties to Treaty. The parties agreed that they would work toward gaining a better understanding of each other’s views of Treaty and try to reach a common understanding.

The Parties and the Office of the Treaty Commissioner are guided by the following principles:

When the Treaty Table talks began, the FSIN and the Crown agreed to explore and discuss treaty rights and/or jurisdictions in seven areas:

They also agreed to identify future opportunities that would enhance governance, achieve economic independence, and improve the well-being of First Nations communities.  In order to facilitate the Treaty Table talks, Working Groups were established for each area to develop options for the protection and enforcement of treaties and the treaty relationship.

On February 15, 2007, the OTC released a report entitled “Treaty Implementation: Fulfilling the Covenant” (TI Report). This Report was commissioned by the Chief of the FSIN and the Minister of Indian Affairs in 2005 with the goal for OTC to present recommendations to the Parties on how to proceed with Treaty discussions at the Treaty Table.  Several consultations in various communities were undertaken in this regard, with input from the Exploratory Treaty Table.  Parties to the Treaty Table (FSIN and Canada) were to submit responses to this report.

Through the Treaty Governance Office (TGO), FSIN prepared their response with the creation of a Treaty Task Force (TTF) to review the OTC Report and provide analysis and recommendations to the Chiefs-in-Assembly. The TTF, with support of the Chief’s Advisory Committee (CAC) drafted ten foundational principles as a basis for reviewing/analyzing the OTC Report and to guide the FSIN in future discussions with the Crown on this matter.  These ten foundational principles were adopted by the Chiefs-in-Assembly on May 29, 2007.

Our vision is that we will live on the land, as we have always, where our Peoples will be self-determining and economically independent, where we will walk in health and happiness with strength, unity, balance and according to our oral traditions as sovereign Nations, as bestowed by the Creator and as affirmed by Treaty.

Our mission in fulfilling our Treaty is that our governments and institutions will serve and benefit every citizen of every First Nation in a fair and just manner, based on our distinct culture, laws and customs, according to the Spirit and Intent       of Treaty.

The primary mandate of the FSIN is the protection and implementation of Treaty. In the spirit of sharing and working together, these Principles on Treaty Implementation have been presented not only in Saskatchewan, but also in other provinces where requested.

The FNGP project team developed a comprehensive and holistic Self-Determination and Governance Framework that can be used for a variety of purposes: 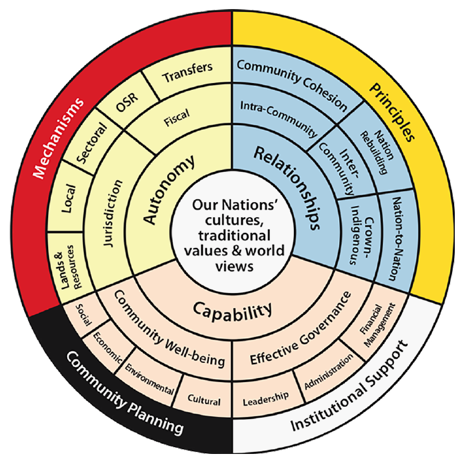 Office of the Treaty Commissioner

Report of the Royal Commission on Aboriginal Peoples