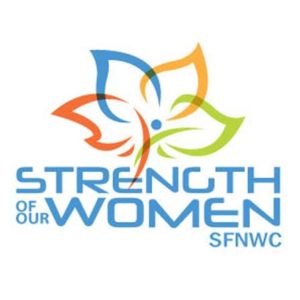 SFNWC members include the following:

Through a series of strategic engagements, the Women’s Commission determined four high level strategic areas to direct their work:

During the past year, the Advisory Circle provided advice on three major initiatives.  They served as the planning committee for the FSIN Women’s Leadership Assembly.  The Leadership Assembly brings together First Nation women Chiefs and Headwomen/Councillors and was held on May 29-30, 2018. The Advisory Circle also worked in partnership with the FSIN Women’s Secretariat and Sexual Assault Services of Saskatchewan (SASS) on a research project that will inform the development of an action plan to end sexual violence.  They were involved in reviewing the research findings and providing input into the recommendations. The FSIN Women’s Secretariat hosted a two -day women’s focus group on March 21-22, 2019 involving the SFNWC Advisory Circle and knowledge keepers from each of their areas.  The focus group provided positive space and time for Indigenous women to come together to discuss issues affecting them and their families and deliberate their own solutions.

The SFNWC directed the FSIN Women’s Secretariat to continue working on establishing a Women’s Institute and selected “Saskatchewan First Nations Women’s Society” as the name of the Institute.  By-laws for incorporation have been approved and an interim Board of Directors has been selected. The objectives of the Women’s Society will include the following:

Once the Institute is established, FSIN will apply to have it registered as a charity which will increase funding opportunities. As a registered charity, the Women’s Institute will be able to submit funding proposals to provincial, national and international foundations.

In the Declaration to Honour Indigenous Women and Girls, FSIN made a commitment to take responsibility for and action to address the disproportionate victimization of Indigenous women and girls and, based on this commitment, the SFNWC and FSIN Women’s Secretariat have undertaken the following measures:

With funding from Status of Women Canada, the Women’s Secretariat developed four violence prevention units for Grade 9 curriculum called Sākīyıso (Loving Oneself) – Understanding and Building Healthy Relationships. The curriculum includes significant cultural teachings and three original videos featuring Indigenous youth and Elders. The videos are based on Elders’ teachings in Cree, Saulteaux and Dene.  One video is about male bullying and bystander actions; one is on female bullying, its causes, and how to transform when one is themselves a bully; and the third video is about dating violence.  The curriculum was piloted tested in ten First Nation schools and is in the final editing and printing process.

Bill S-215, An Act to amend the Criminal Code(sentencing for violent offences against Aboriginal women)

In 2016, the SFNWC brought resolutions to the FSIN and AFN Chiefs Assemblies and gained support for Bill S-215, An Act to amend the Criminal Code (sentencing for violent offences against Aboriginal women), which went before the House of Commons in November 2018.  If passed by Parliament, the Criminal Code would be amended and the Courts will be required to consider the fact that when the victim of an assault, sexual assault, or murder is an Aboriginal female, this constitutes an aggravating circumstance for the purpose of sentencing the perpetrator. This change will send a clear signal that the lives of all women and girls are valued and precious, whether or not they are Indigenous.  Vice Chief Heather Bear met with Senator Lillian Dyck on December 12, 2018, to continue supporting and advocating for the passage of Bill S-215.

Sexual Assault Services of Saskatchewan (SASS) received funding from Status of Women Canada for a three-year project aimed at developing a Sexual Violence Action Plan.  They invited the FSIN Women’s Secretariat and the Prince Albert Grand Council Women’s Commission to participate on their advisory committee. SFNWC passed a motion approving the appointment of a representative to the advisory committee and called on SASS to utilize the SFNWC Advisory Circle as a First Nations-specific advisory committee to which SASS agreed.  SASS met with SFNWC in May 2018 and with the SFNWC Advisory Circle in February 2019 to present the findings of the research and obtain input on the strategies and actions for the Sexual Violence Action Plan.

In May 2018, the FSIN Chiefs-in-Assembly unanimously passed resolution #2070 supporting redress for the forced sterilization of Indigenous women.  In 2015, several Indigenous women in Saskatchewan publicly revealed they had been forced into having a tubal ligation immediately after childbirth in a Saskatoon Health Region hospital; and many have initiated class action litigation.  The Treaty Rights Protection Fund has provided financial assistance for the class action.  A resolution was also brought to the Assembly of First Nations Annual General Assembly in July 2018, which passed unanimously.  In October 2018, FSIN provided a letter of support for a submission to the United Nations Committee against Torture and Other Cruel, Inhuman, or Degrading Treatment or Punishment.  On December 5, 2018, the Committee released its report on Canada and made the following recommendations with respect to the forced sterilization of Indigenous women:

Vice Chief Bear met with Senator Yvonne Boyer on December 12, 2018, and Alisa Lombard, lawyer for the class action, and will continue supporting redress for victims as well as legislative and policy measures that criminalize the forced sterilization of women.

The forced sterilization of Indigenous women falls under the internationally accepted definition of genocide and breaches the free, prior and informed consent standards contained in the United Nations Declaration on the Rights of Indigenous Peoples.

NATIONAL INQUIRY INTO MISSING AND MURDERED INDIGENOUS WOMEN AND GIRLS

Between May and October 2018, the National Inquiry held Institutional Hearings as well as Knowledge Keeper and Expert Hearings.  The Institutional Hearings were scheduled, “…to examine the systemic causes of institutionalized violence against Indigenous women, girls and 2SLGBTQQIA peoples and the policies and practices that are in place to keep women and girls safe” as well as, “…issues such as policing practices and relationships with Indigenous communities and [to] hear from government service providers, health authorities and others.”  The Knowledge Keeper and Expert Hearings covered topics such as Indigenous law, decolonization, human rights, racism, colonial violence and sexual exploitation.  The final phase of submissions involved Parties with Standing presenting closing statements to the Commissioners of the National Inquiry.  Ninety-five parties were granted standing including the FSIN/SFNWC. Vice Chief Heather Bear presented a report and oral closing submission to the National Inquiry on December 12, 2018.

The Final Report of the National Inquiry into Missing and Murdered Indigenous Women and Girl; Reclaiming Power and Place was released June 3, 2019.  The Final Report reveals that persistent and deliberate human and Indigenous rights violations and abuses are the root cause behind Canada’s staggering rates of violence against Indigenous women, girls and 2SLGBTQQIA people. The two-volume report calls for transformative legal and social changes to resolve the crisis that has devastated Indigenous communities across the country.The Final Report delivers 231 individual Calls for Justice directed at governments, institutions, social service providers, industries and all Canadians.  The report can found here https://www.mmiwg-ffada.ca/final-report/

With funding from Justice Canada, committed during the announcement and launch of the National Inquiry into Missing and Murdered Indigenous Women and Girls, the provincial Ministry of Justice created a Family Information Liaison Unit (FILU) to help families find information about missing and murdered loved ones.  The Ministry of Justice subsequently contracted with the FSIN Women’s Secretariat to employ two Family Information Liaison Officers, who began work at FSIN in January 2018. The Liaison Officers work closely with the FILU manager and staff at the Ministry of Justice to connect family members with agencies that may have information about their loved ones, including the RCMP, municipal police services, Office of the Chief Coroner, Courts, Social Services, and similar agencies throughout Canada.  The Liaison Officers and FILU staff work with all families seeking help including those with missing and murdered Indigenous women and girls as well as men and boys. When the Liaison Officers began work in January 2018, they had 18 clients and by March 31, 2019, they were working with 105 family members.

In the Fall of 2018, the program was renamed Matchstickas it serves as a spark for Indigenous Women Entrepreneurs.

This initiative is shared between the Saskatchewan First Nations Women’s Commission and the Health and Social Development Commission.  The Health and Social Development Secretariat and Women’s Secretariat are involved in a partnership between several First Nations and the College of Nursing at the University of Saskatchewan with a goal to establish a midwifery training program with Indigenous knowledge incorporated.  The Secretariats also partnered with Sturgeon Lake First Nation and File Hills Qu’Appelle Tribal Council/All Nations Healing Hospital in research on Indigenous midwives and doulas

STRENGTH OF OUR WOMEN AWARDS

In November 2018, the SFNWC hosted their third Strength of Our Women Awards Gala.  The awards honour the strength and resiliency of First Nations women in Saskatchewan and showcase the many contributions our women make to First Nations and the broader community. The following women were honoured as award recipients and matriarchs:

The proceeds from the Strength of Our Women Awards Gala are dedicated to initiatives that support the families of missing and murdered Indigenous women and girls as well as men and boys.